If you continue to access this website without changing your preferences, we will consider that you consent to the use of cookies as set out here.

Hide this message and remember my decision

On Wednesday, four warrants were executed by local officers and the Rural Task Force around the county. Six people were arrested, five in connection with fly-tipping activities, six vehicles were seized and 19 people were reported to court for various offences.

The warrants took place in Canterbury, Ramsgate, Ash and Maidstone. 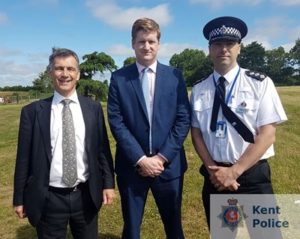 Chief Inspector Mark Weller oversaw the action in Dover, he said: “This is a large scale issue which blights communities across the county. To effectively tackle this problem it is important we work alongside our colleagues from the Kent Resource Partnership and the local authorities to send a message to those illegally disposing of waste their behaviour will not be tolerated.

“This is not just about someone littering, this is organised criminality that has a negative impact on communities and we are keen to work with local people to continue to stamp out this crime.

“We would ask anyone having work done at their home to make sure that they check the person taking away their waste is licensed to do so. Police and local authorities are also keen to hear from anyone who has information of those involved in fly-tipping. By working together we can protect the garden of England and the countryside can be enjoyed by the community.”

Kent’s Police and Crime Commissioner Matthew Scott said: “Fly-tipping is primarily dealt with by local councils but today’s co-ordinated enforcement shows what can be achieved when the police and other partners work together.

“Residents can do their bit too by reporting any suspicious behaviour to Kent Police, and by downloading the Countryeye app to report incidents of fly-tipping in their communities.

“I’ve made it clear that crime is important no matter where it takes place and, thanks to my investment in up to 200 new police officers this year, Kent Police’s specialist Rural Policing Team will soon be able to do even more to bring rural criminals to justice.”

In addition to the arrests officers seized 30 cannabis plants from a property in Shatterling, two people were arrested in connection with the find.

Kent Resource Partnership Chairman Cllr Rory Love said: “Unscrupulous criminals are out there taking money from householders and businesses to dispose of their waste. Then they pocket the cash and dump the waste in our countryside.

“And it’s the council taxpayer who picks up the bill of over £1 million – as our local authorities are forced to clear up the mess.

“The message is clear to all those involved in illegally dumping waste – Kent councils are working together to catch those who blight our communities by fly tipping. And as this day of action showed, we will find you and we will prosecute you.”